With OpenStack, instances, or virtual machines, play a large role in a cloud's workload. OpenStack provides a way to create and manage instances with its compute service, called Nova. In this guide, we cover the preparatory steps required to create an instance, including setting up a private network and router, creating a security group, and how to add an SSH key pair. Then, we explain how to create an instance using Horizon.

In this section, we explain how to create a private network and router. The instance created later in this guide is created on this private network. The router is created so the private network can be connected to your cloud's public network, allowing you to assign a floating IP address to it, making the instance accessible over the Internet. Next, we cover where security groups can be found and managed. In these next few sections, we explain how to create the components with a screenshot then follow up with an explanation of the details to fill out.

To create a private network, begin by navigating to Project -> Network -> Networks.

Load the form to create a network, by navigating to Create Network near the top right. 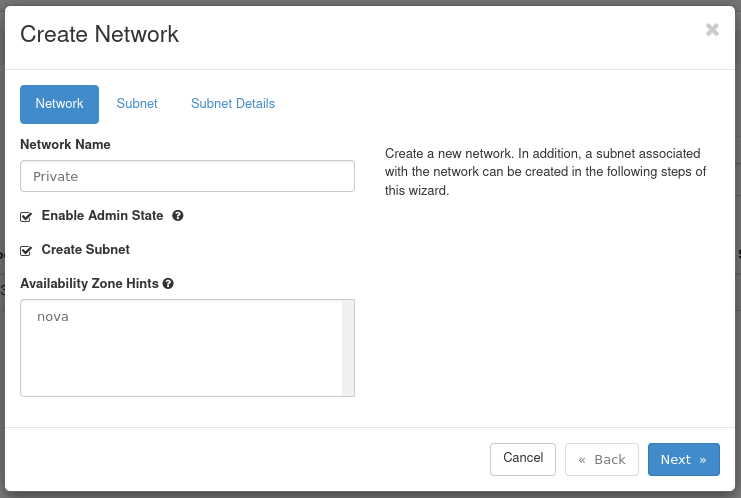 Next, move on to the Subnet tab of this form. 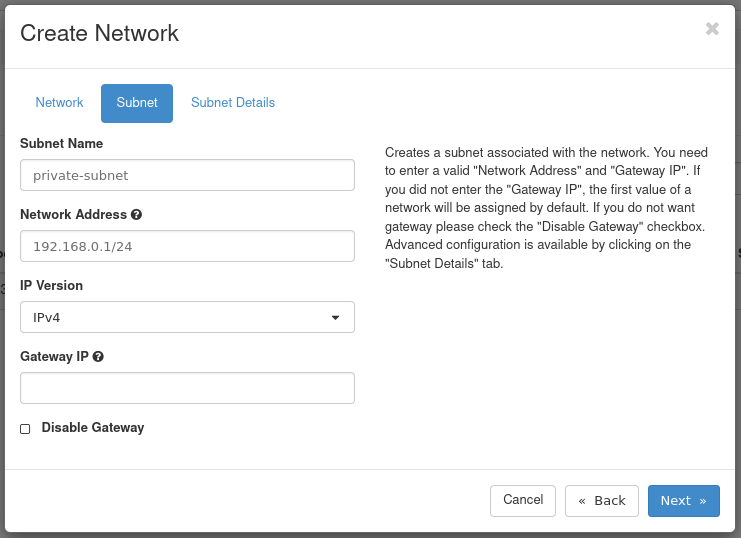 Next, move on to the Subnet Details tab of this form. 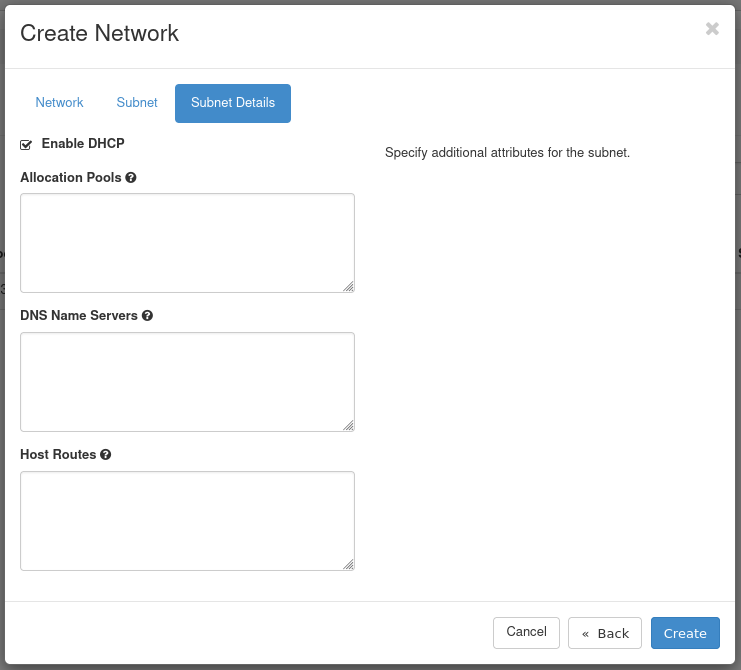 To create a router, begin by navigating to Project -> Network -> Routers.

Load the form to create a router by navigating to Create Router near the top right. 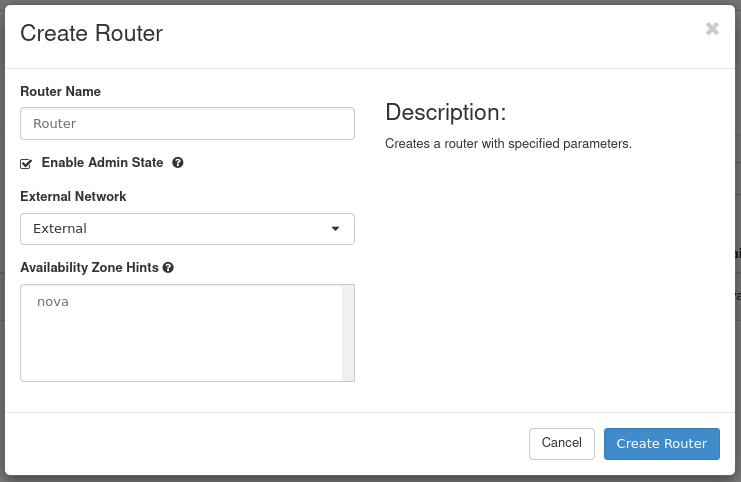 Once complete, create the router by pressing Create Router.

Next, connect the router to the private network, by attaching an interface. Performing this step allows network communication between the Private and External networks.

To attach an interface to the router, first navigate to the list of routers and locate the one previously created. 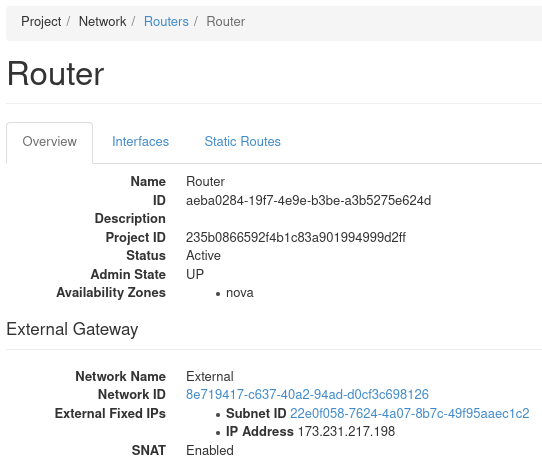 Press Submit to attach the Private network to this router. The interface is then attached and now listed.

Should you want to visually see the network topology for your cloud, navigate to Project -> Network -> Network Topology.

This figure indicates the External network is connected to the Private network through the router called Router.

Security groups allow control of network traffic to and from instances. For example, port 22 can be opened for SSH for a single IP or a range of IPs. In this demonstration, we create a security group for SSH access. This security group is then applied to the instance we later create.

To create a security group for SSH, load the form by navigating to Create Security Group near the top right. 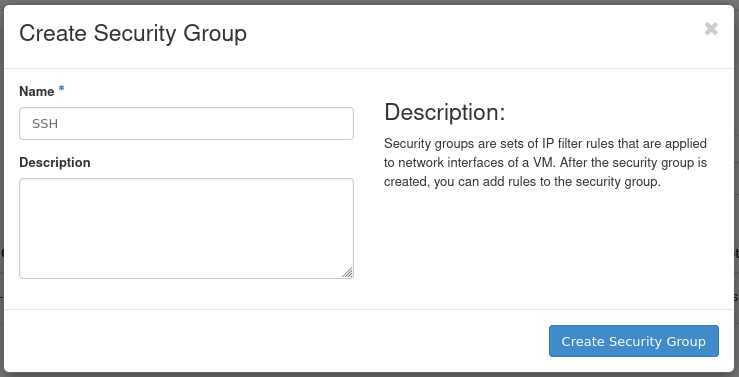 To add a rule, load the form by navigating to Add Rule near the top right. 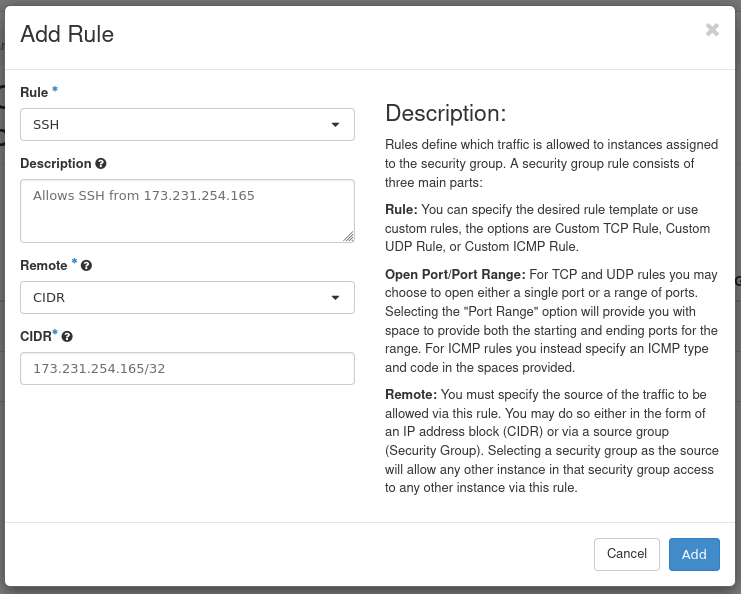 How to Create your First Instance​

With the previous steps complete, almost everything is in place to create your first instance.

An SSH public key is required to access an instance over SSH. This key is injected into the instance when created. An SSH key cannot be added to an already running instance.

For this guide, we are arranging it so this instance can be accessed over SSH from one of the cloud's hardware nodes. Due to this, you must create an SSH key pair in one of the hardware nodes. The public portion of that key pair is associated with the instance created later in this guide. To learn how to create this key pair, see the supplementary guide: Create SSH Key Pair for an OpenStack Control Plane Node.

Several operating system images are available with which to create instances. To view available options, navigate to Project -> Compute -> Images. To upload your own images, see How to Upload Operating System Images using Horizon.

To create the first instance, begin by navigating to Project -> Compute -> Instances.

Pull up the form to create an instance by navigating to Launch Instance near the top right. 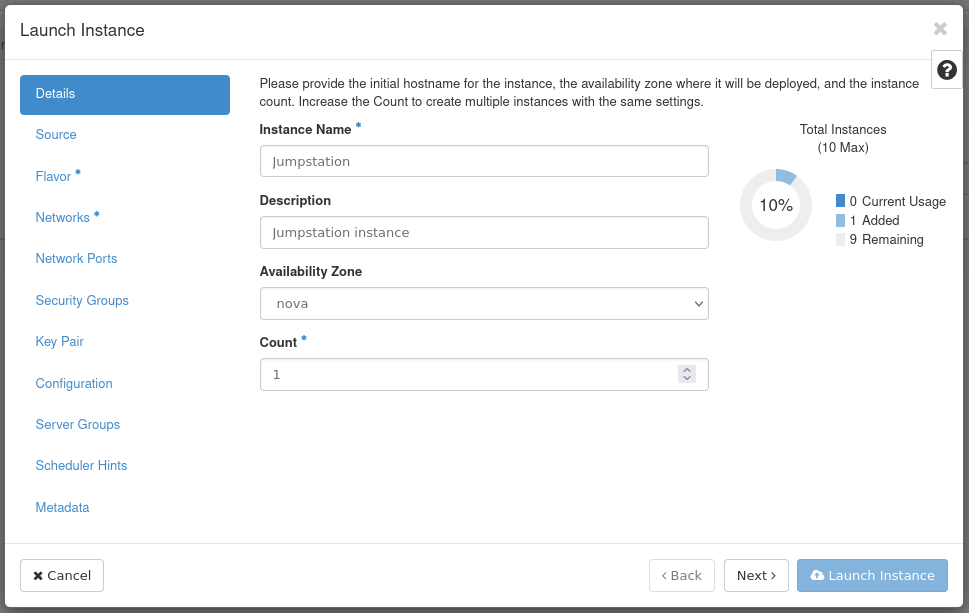 Next, move to the Source tab allowing you to specify an operating system image. 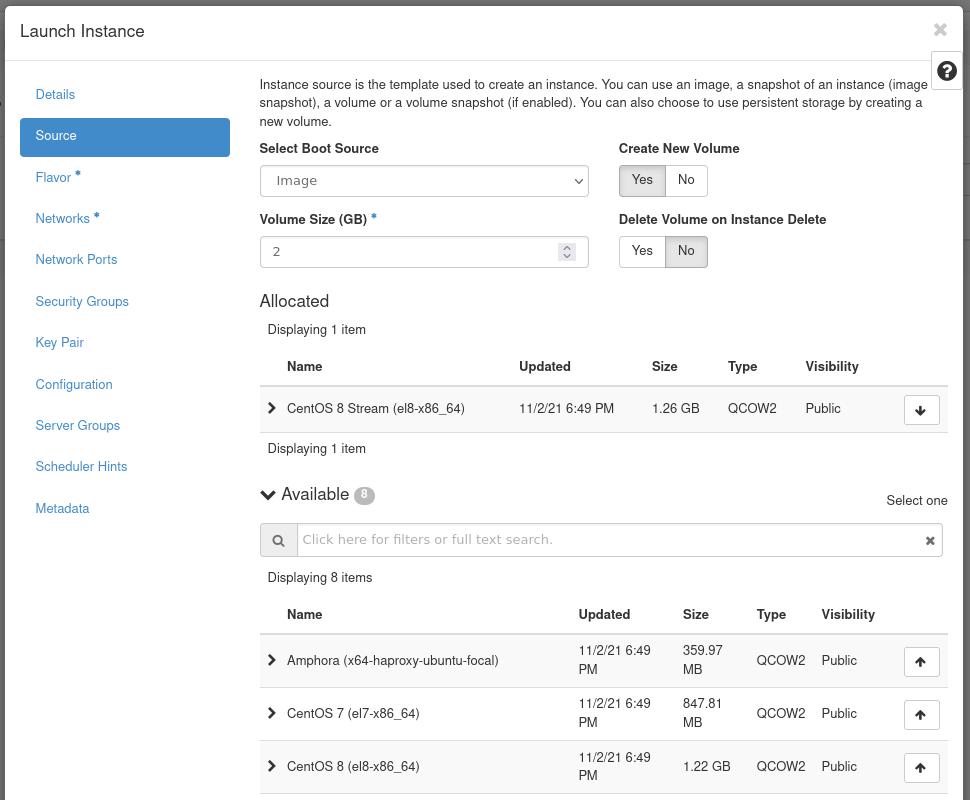 This concludes configuring the instance's source. Next, move to the Flavor tab.

Flavors are a way to define the VCPUs, RAM, and Disk space used by an instance. Pre-built flavors are available for you. For this step, select an appropriate flavor from the options under the Available heading. This example uses the m1.small flavor.

Next, move to the Networks tab.

In this section, you specify the network with which the instance is associated. For this example, select the Private network created previously. You can choose the External network as well, but this is generally recommended against in favor of using a floating IP should your instance require Internet connectivity.

Note! Only expose portions of your network as necessary. This reduces the attack surface and improves application security. If a private network is not created and an instance is created in a default cloud, it is associated with the External network. This means the instance consumes a public IP and it could be reached over the Internet.

Next, skip over the Network Ports tab and move to the Security Groups. 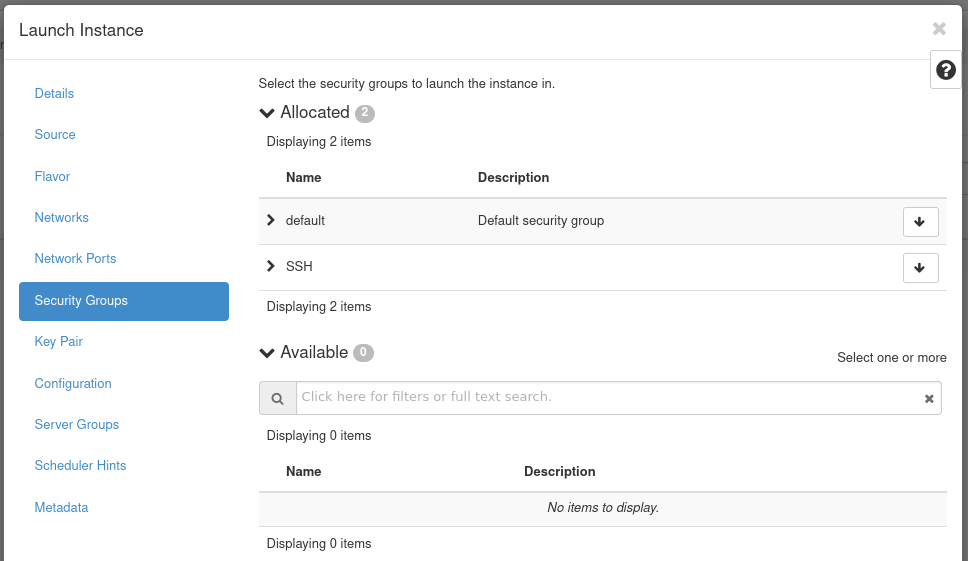 As the final step, move to the Key Pair tab. 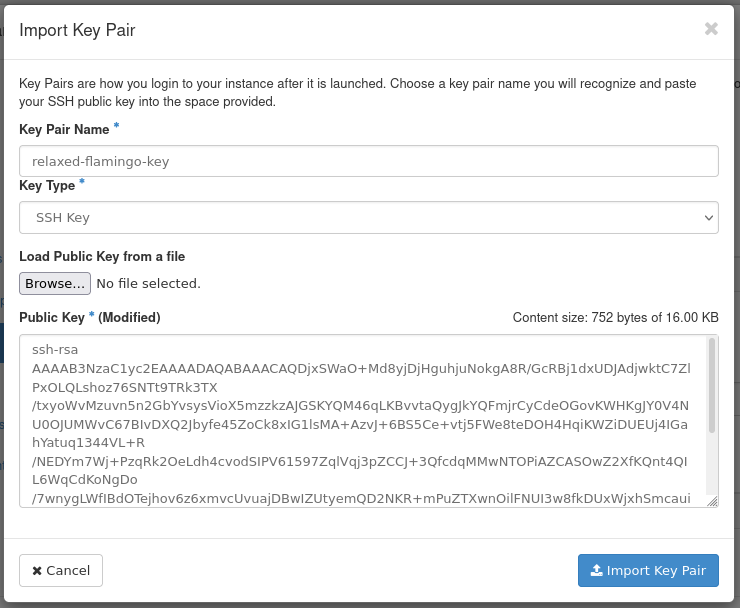 Once the public key is imported, create the instance by pressing Launch Instance.

Note! -- We skip some sections of the instance creation form as they are not required for this demonstration.

The instance goes through a build process. Allow a few minutes for this to occur. When complete, the instance appears in the Instances Listing page.

The instance created previously is associated with a private network. Presently, the only way to access this instance is to connect to it from with the cloud's hardware nodes. Another option for connecting is to use a floating IP. In this section, we demonstrate how to allocate a floating IP and attach it to this instance.

Next, load the form to allocate a floating IP by pressing Allocate IP to Project.

Press Allocate IP to add this floating IP address for use.

Next, in the same section, allocate the IP to the Jumpstation instance by clicking the Associate button at the far right.

This concludes allocating the floating IP to the instance. This instance is now accessible over SSH from the first hardware node of your cloud.